There is not an ounce of meat left on the bones of the poor flâneur—that archetypical wandering observer. Baudelaire and Poe took the first hearty bites. Walter Benjamin chewed off the gristle and sucked out the marrow. A century of intellectuals followed, fighting over the scraps, and today academics keep boiling the same carcass over and over making a progressively weaker broth.

To saunter is a science; it is the gastronomy of the eye. To take a walk is to vegetate; to saunter is to live…

Which is why I found myself disgusted at that little voice in my head saying, "let the flânerie begin," as I stood on the outer edge of Shah Jahan's old walled city that still survives as an embedded antiquity within Delhi, India. It's hard to imagine a more pretentious thought, but it's also hard to resist. There isn't much left to say about the flâneur, but as a photographer on the street of a crowded city you also can't avoid the comparison. The street photographer is the modern day descendent of Baudelaire's wandering observer – an observation that Susan Sontag carved off the flâneur's remains long ago.

Baudelaire, in the Painter of Modern Life describes the idling hero:

The crowd is his domain, just as the air is the bird's, and water that of the fish. His passion and his profession is to merge with the crowd. For the perfect idler, for the passionate observer it becomes an immense source of enjoyment to establish his dwelling in the throng, in the ebb and flow, the bustle, the fleeting and the infinite. To be away from home and yet to feel at home anywhere; to see the world, to be at the very centre of the world, and yet to be unseen of the world, such are some of the minor pleasures of those independent, intense and impartial spirits, who do not lend themselves easily to linguistic definitions.

The search for your identity as an artist requires you to resist the temptation to read yourself into this part of Baudelaire's little drama. Baudelaire, after all, is describing the painter of modern life, but he's been dead for almost 150 years. To take up the torch and proclaim yourself his modern artist is to put on the breeches of a 19th century dandy and strut around like a rooster. But yet, here I am dwelling in the throng, observing its bustle, and in the least ironic way possible. At least I'm a little bit ashamed. 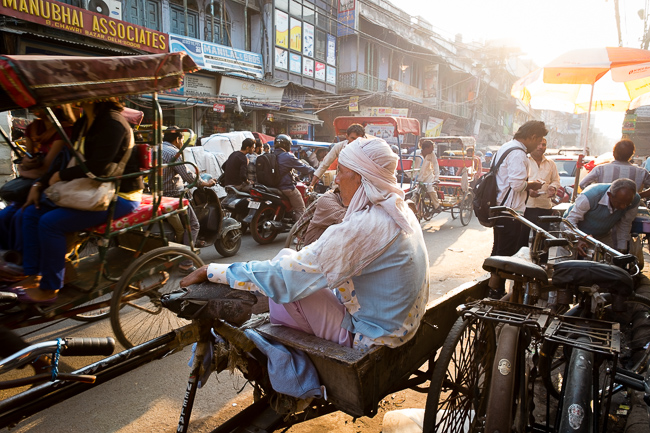 Along the Chawri Bazaar

While the flâneur is an easily generalized archetype that can be cast in any crowded place, it is forever tied to Paris. Edmund White, in his book The Flaneur: A Stroll Through the Paradoxes of Paris describes Baudelaire's Paris as a lost city destroyed by urban renewal. What was once the "cosy, dirty, mysterious Paris" of Baudelaire, Balzac, and Flaubert was lost to motor-powered buses, uniform lighting, linear streets and unbroken facades. Napoléon III began the process that turned narrow alleys into gleaming boulevards and a buzzing hive of artistic genius into a sterile monument of bureaucracy. Or so the story goes…

I am suspicious of White's nostalgia for old Paris. I have no doubt it was great for a potent shot of absinthe and an epic case of the clap, but should we really yearn for days of dirty water, trash on the streets, and rodent-born plagues? But then here I am strolling down the Chowri Bazaar when I could be other places, stepping over piles of garbage, inhaling alternating breaths of perfume, spices and urine, sharing the narrow street with cows, horses, goats, rickshaws, cars, throngs of people, and I'm dumbstruck by what Walter Benjamin described as a "landscape built of sheer life."

The flâneur is the creation of Paris. The wonder is that it was not Rome. But perhaps in Rome even dreaming is forced to move along streets that are too well-paved. 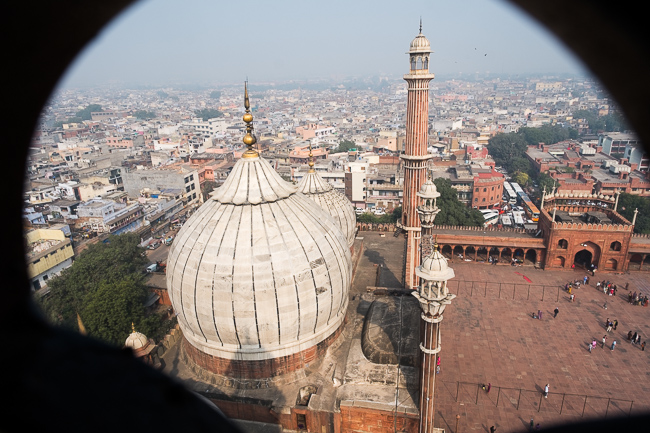 Old Delhi is built on the crumbling remains of Shahjahanabad, the great Mughal emperor's walled city. Shah Jahan with his army of Persian architects is best known for building the Taj Mahal in Agra, but he also built the focal points of Old Delhi: the Red Fort that sits a short walk from here on the edge of the Yamuna river; the great Jama Masjid, the largest mosque in India, anchoring the east end of the bazaar; and the Chandni Chowk market, which is still one of India's largest wholesale markets. The greater Delhi area has been a center of urban development for thousands of years. Legend (and some archeology) places the ancient city of Indraprastha, the capital of the Pandavas from the epic Mahabharata (compiled circa 400BCE), in the immediate vicinity. By these standards Shahjahanabad, established in 1639, is a relatively recent development. Shah Jahan was finishing up about the same time Cardinal Richelieu and Louis XIII were in Paris fretting over Hapsburg power during the Thirty Years' War. Over time much of its polish has worn off: the reflecting pools and mid street canals have since been filled in, random electrical wiring has been installed on the buildings like cobwebs, modern streets have punctured the city to accommodate motor vehicles. But the development has been organic, unplanned, the result of addressing immediate needs with immediate action making the city, despite its relative youth, seem much older than Paris. 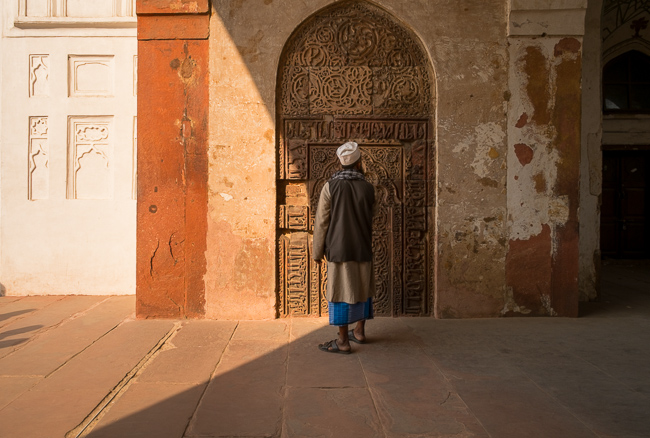 Describing the development of traditional Indian communities, Sayed S. Shafi, one of Delhi's early town planners, could have been talking about old Paris:

They represent a form and pattern of living that developed through the ages evolving gradually in space and in time, and in response to the specific needs of the people. The climate, topography, cultural conditions helped to give them form and pattern; invariably, local skills and materials were used. Such communities did more than just provide basic shelter. They were organically conceived and the represent a natural evolution of space and the sustenance of life. They provide a degree of inner security and protection and, at the same time, furnish opportunities for social interaction and the flowering of art, craft, and cultural talent."

This natural and messy evolution of urban spaces conflicts with the ideals of modern urban planning that Edmund White attributes to the destruction of old Paris. From the Jama Masjid in the heart of Old Delhi you can take a quick tuk-tuk ride three miles south to New Delhi, Edwin Lutyens' monument to British imperialism complete with colonnades, arches, and wide boulevards. You can compare the two forms of urban development for yourself. For the street photographer, the difference is like being transported from a jungle to a desert. Travel guidebooks praise the ornaments of this Edwardian themed environment: the domed and columned Rashtrapati Bhawan, the colosseum-like Parliment House, the India Gate, Lutyens' homage to the Arc de Triomphe. But there is almost nothing other than postcard-like reproductions to photograph here. Compared to Old Delhi, Lutyens' modern city seems frozen in the past—a past that was already archaic when Lutyens designed it.

The planned city leaves little to discover that didn't come from the mind of the architect—it's a single idea imposed on a population. Every view and vista has been calculated, overdetermined, for a particular effect. If the city is what Lewis Mumford called a "special receptacle for storing and transmitting messages," then Lutyens' New Delhi has one message, while hidden in the twisting passages and alleys of Old Delhi you can still find stories of the many nameless storytellers and take Walter Benjamin's (citing Hofmannsthal) advice "to read what was never written." 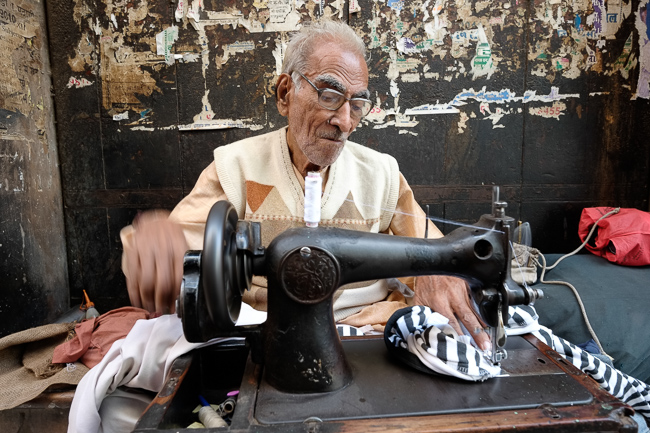 Street-side tailor working in a back alley of Old Delhi

Old Paris is no more (the form of a city
Changes more quickly, alas! than the human heart);

Shahjahanabad was once walled, but the walls have since mostly crumbled leaving large gates along the edge of the old city, orphaned ornaments pointing to a previous era. The transition from a walled fortress town to an open urban space parallels the changing function of the city from a place you defend and in which you remain to a node in an always-changing network of movement and global commerce. The bits and pieces of the wall that have remained have been the focus of a struggle between those who want to preserve the history of the walled city and the "natural evolution of space and the sustenance of life" that Shafi writes about. In 2012, to help preserve what was left of the wall, an Indian court ordered the Delhi government and the Archaeological Survey of India to remove the "police post, milk depot, urinals, transformers, dhalao (dustbin) near" the remaining sections. But they have been mostly unsuccessful; the task of restraining encroachments in an area so densely packed with people trying to scrape out a living is almost impossible. Preserving the old city at this particular state of decay also seems arbitrary—why this year or decade and not the previous or the next? But other options like restoring it to a former state or bulldozing it and starting fresh seem equally ill-advised. The question becomes: what do we with the past and the future given the fleeting contingencies and requirements of the present? 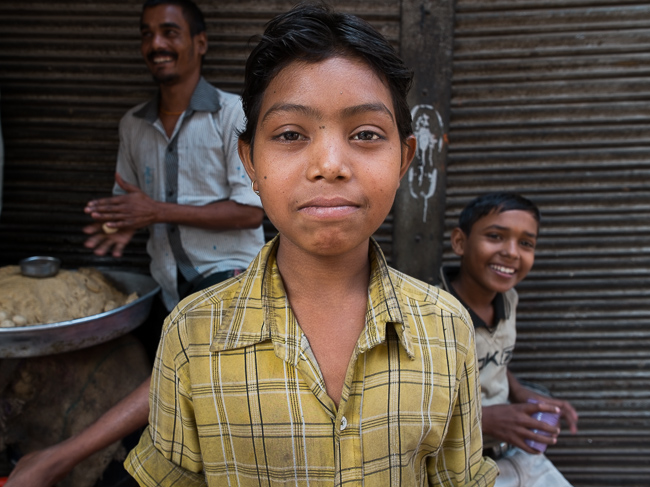 Modernity is often characterized in terms of consciousness of the discontinuity of time: a break with tradition, a feeling of novelty, of vertigo in the face of the passing moment. And this is indeed what Baudelaire seems to be saying when he defines modernity as 'the ephemeral, the fleeting, the contingent.' But, for him, being modern does not lie in recognizing and accepting this perpetual movement; on the contrary, it lies in adopting a certain attitude with respect to this movement; and this deliberate, difficult attitude consists in recapturing something eternal that is not beyond the present instant, nor behind it, but within it.

Foucault hints at the deeper connection between the flâneur, the master of observing the perpetually moving present as it flow past his eyes, and the photographer, whose medium has always been the exact present moment and whose task is to capture something eternal within it. He also provides a clue about why photographing the crumbling, chaotic Old Delhi is such a rich experience while the constructed and arguably more aesthetically pleasing city of New Delhi offers so little to the photographer. In a paradoxical twist the old city is in many ways more modern by Baudelaire's definition—it's a place where the ephemeral and fleeting are plainly visible. And at least as long as it resists the yoke of centralized urban planning, Old Delhi is a place where you can still be a street photographer and maybe even a flâneur. 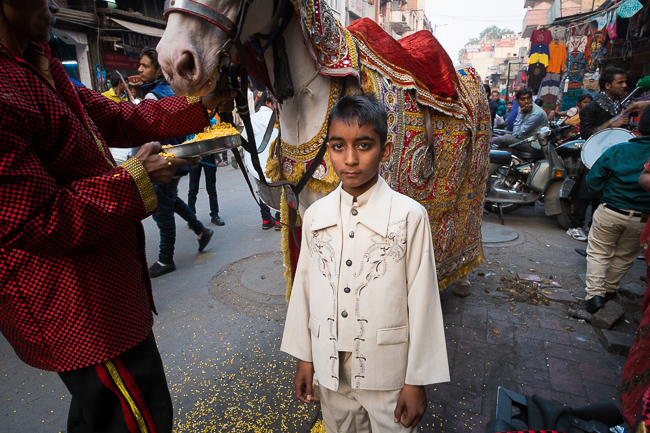