Blogs like The Strobist and courses like Zack Arias' One Light Workshop have made the once mysterious craft of effectively working with artificial light available to everyone. Flickr has a strobist group with at last count 83,851 members who, often armed with nothing more than a simple Vivitar manual flash, have learned to make compelling, dramatic photos on a shoestring. The torrent of free information and the instant feedback from digital cameras has democratized photography in a way that scares a lot of professional photographers. But there's no putting this genie back in the bottle and the days of the secret sect of illuminati-like photographers guarding their precious trade secrets has long past. Personally, I think it makes the profession stronger.

So today I'm going to share a few of my own 'strobist' snapshots of Jessica's crazy halloween costume. Since it's not her habit to dress in feathers and fake eyelashes, the situation begged to be photographed. We shoved the couch out of the way, set up a quick light, and started shooting. In true strobist fashion, it was quick and casual, no fancy art direction or stylists, just two people, some beer, and a light. But we are departing a bit from the typical strobist recipe when it comes to that light. For this, I am benching the Vivitar 285 in exchange for 1200 watt-seconds of radiant honey pumping out of a Profoto pack/head combination. Attached to that is a 74" Elinchrom octa light bank that takes the light from the Profoto head and wraps it around your subject like a Altai cashmere blanket. You really can't wrong with this combination. In fact, when you think about how careful and precise you need to be when working with small sources, this combination almost feels like cheating. It's not without it's challenges, though. For one thing, our living room is ridiculously small—seriously you'd think hobbits live here. The octabank takes up half the room and spills light all over the place. It's not the ideal setup for small spaces. Since I am aiming for a direct but soft effect, it's not all bad though. All that spilled light bounces off the opposite wall and the ceiling becoming it's own fill. To control the light on the background I tilted the bank away from the back wall to give a little gradient making it contrast with the lighting on the subject. The rest is easy. With so much soft light everywhere there is almost no bad angle.

Here's what you end up with: 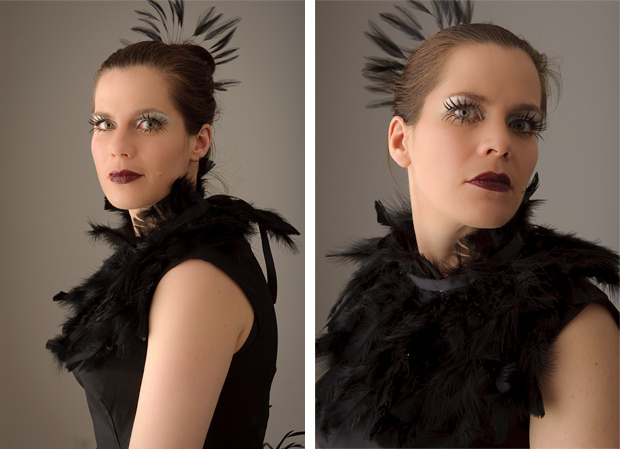 Given the nature of the costume and makeup, we thought we would also kick up the contrast and drama a little by corralling the light into a more manageable form. To do this I swapped out the big octabank for a Profoto softlight refector [PDF brochure], also known as a beauty dish. A beauty dish is a funny sort of light modifier; it is a relatively large source (20.5" in diameter) but, because it is basically light bouncing off metal, it has a crispness you won't get from a softbox or umbrella. Unmodified, the Profoto dish spits out a 65 degree cone of light, which is a little too wide for our purposes, so I added a grid, which narrows the light into a tighter 25 degree beam. This works very well in a tiny room because the light can do double duty, lighting both Jessica, and casting a tight circle of light on the background. With this combination you need to be a little more controlled. The dish, especially in this situation with no other fill light, casts deep shadows which need to be managed. I'm using it here in a traditional way, placing it close—matching the distance to the face more or less to the diameter of the dish—and almost parallel to, but a little above, the plane of Jessica's face to cast a shadow under the chin and give the face a little shape. The little shadow under the lower lip, the big shadow under the chin, and the round catchlights in the eye make it very easy to recognize the source. Once you start noticing it, you will see beauty dish lighting everywhere; it is a very common way of shooting makeup ads. 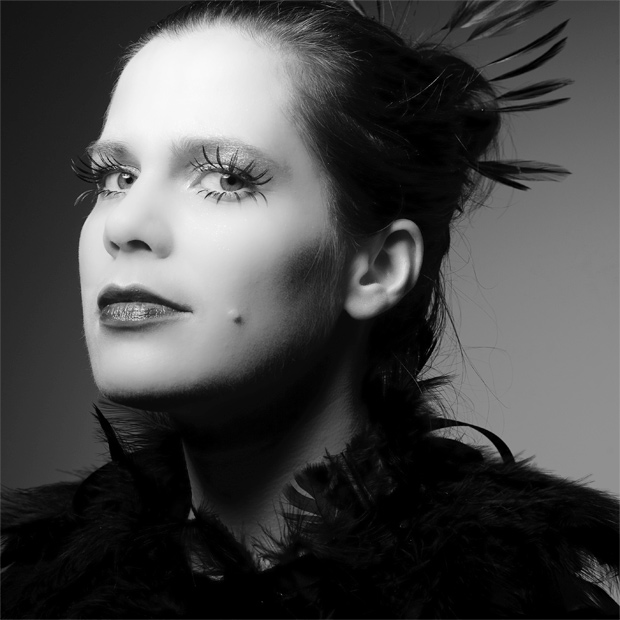 Incidentally, the octabank makes an easy-to-use, portable, self-illuminating backdrop when you're looking for that all-white background look. It's not my favorite thing, but since we had it all set up I fired off a few with the beauty dish as key light and the octabank as background: 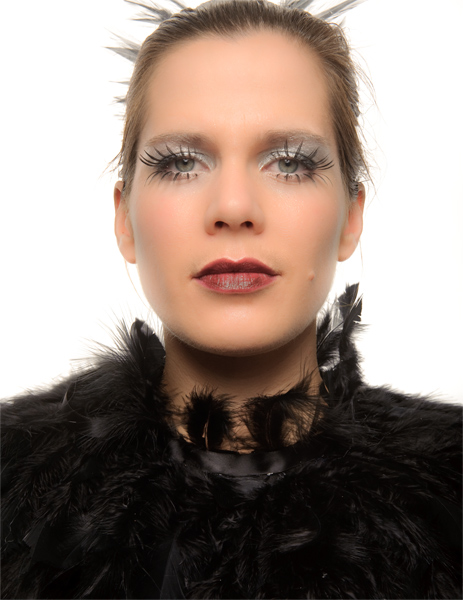